The USA is "investigating" whether the contents of Commerce Secretary Carlos Gutierrez's laptop PC was copied by Chinese sleuths during a recenttrip to Beijing according to AP reporter Ted Bridis.
Bridis backs his claim on what anonymous "officials and industry experts told the Associated Press," presumably himself. Yet the Commerce Department, Department of Homeland Security, and the FBI have nothing to say on the allegation or are not even aware of any such "investigation."
Ted Bridis has a long history of keyboarding about Chinese cyber spies for Cold War mongerers who believe that the destruction of American civilization itself is but a mouse click away from a Beijing bunker.
But where was the outcry when Donald Keyser a top State Department official lost a laptop? Or when he was convicted of spying for Taiwan?
China threat stories are a feature of election cycles in the USA. As I predicted earlier this year, we will hear a lot of suchnoise between now and November.

Damage from the Sichuan earthquake is estimated at close to $10 billion (US) and shares of companies in the region effected by the quakes fell on Chinese stockmarkets and caused a broader decline in Chinese stocks. The Shanghai Composite Index is back down below 3,500 and the CSI 300 Index also plunged this week on the bad news about the impact of the massive earthquake just ten days ago.
Beijing now says over 50,000 people perished in the disaster and expect the death toll to continue to climb. Almost 5 million are reported homeless.
Over 14,000 industrial enterprises are impacted with severe destruction at some big companies such as Dongfang Electric - an important manufacturer of electric engines and motors. Downstream businesses will be faced with supply and price pressures. Asia's biggest oil refiner Sinopec is diverting product to the region and that could mean shortages and price increases in southern and coastal China.
Short term positive trend will be in rebuilding and speculators briefly drove up share prices for Chinese companies in cement, steel, and construction services.
And 184 historic and tourist sites were damaged and in some cases destroyed by the earthquake and may take years to rebuild, if at all, in a region where tourism was just beginning to be developed.

Blood is Thicker Than Water

Taiwan Reunification Watch: The head of the Taiwan work group on the Chinese Communist Party central committee, Mr. Chen Yunlin, said in Beijing today that "blood is thicker than water" and China and Taiwan were moving toward a consistent dialogue on expanding relations.

Only days after Ma Ying-jeou was inaugurated last Saturday, it is announced that Kuomintang (KMT) party Chairman Wu Poh-hsiung will arrive in Beijing to meet with President Hu Jintao.
Meanwhile the invasion of Chinese from the mainland may begin as early as July 4 when eight Taiwan airports will be opened for direct flights from China ending over 50 years of cross Straits air tension!

The latest wrong thinking meme in news reporting is to (once again) blame China for the run up in oil prices. In fairness some mainstream media outlets (CBS, PBS) are following the surge in oil prices to NYMEX and placing blame where it belongs - on investors and speculators in oil futures. George Soros has gone so far as to say oil prices are the latest global investment bubble. Of course, Soros has long distrusted oil markets.

Yes, demand in China has increased greater than predicted for the last four years and shows little sign of slowing. The IEA forecasted last year that demand in China would raise to 10 million barrels a day as soon as 2012. But that figure is less than half what the United States currently consumes! And demand is coming from everywhere. Car sales are up over 60% year on year so far in 2008 in Ukraine, as just one example. From Latin America to the states of the Indian subcontinent, millions of people are realizing the dream of the American lifestyle centered around the family car. In many ways the start of the 21st Century is much like the turn of the 20th only this time car culture is reaching new markets all over the world.

Chinese auto bloggers are buzzing about Chery Automobile's word that it will begin exporting its A1 minicar to North America in the second half of 2008. The Chery A1 (pictured) is a 1.3 liter hatchback that already sells inside China as the Kimino. Chery says is has passed crash tests and road testing to qualify for European and North American standards. Unclear is whether the A1 will be branded a Dodge (as expected for some time) or as a special Chrysler brand.
Chrysler executives in the USA continue to say Chery is not ready for import in the United States but sales in Mexico are a definite. For border residents such as the Sinomania! staff that puts the Chinese minis in easy reach! 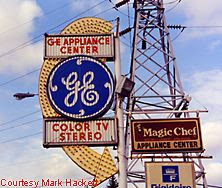 The announcement that GE is hiring investment bankers for a possible sell of its appliance business has commenters buzzing that the Chinese may be interested suitors, specifically Haier which was thwarted in its bid for Maytag three years ago by a shamelessly xenophobic (and non business minded) US Congress. GE's appliance unit has a long and distinguished history as an early manufacturer of household appliances and former market leader but it's sales today - though substantial at over $7 billion annually - have fallen behind foreign brands in Germany and Asia (South Korea's LG, for example).

The first state visit by a Chinese President in a decade has led to a joint agreeement for "Consolidating Exchange and Cooperation Between Japan and China" including a possible end to disputes over the gas and oil riches under the East China Sea. Discussions between Hu Jintao and Japanese Prime Minister Yasuo Fukuda today reveal the two sides may agree to jointly develop the gas and oil of Shirikaba gas field and other disupted areas.