Is China to blame for the pet-food horror unfolding across America with numerous cats and dogs dead from tainted pet food sold by the Menu Foods company of Canada?
So claims ABC in a much touted "EXCLUSIVE" news item picked up by Breitbart.com (the "Report" mentioned in that piece is actually the ABC "report" not a goverment or lab report) and his former boss Matt Drudge and bandied about by numerous other news services.
ABC quotes an unnamed source "close to the investigation" that said the USA Federal Food and Drug Administration (FDA) was focusing on wheat gluten allegedly imported by Menu Foods from China and used in two of its factories. Simultaneously, New York state and Cornell University veterinary school labs announced their discovery of aminopterin in the recalled pet food believing it was the culprit in the pet deaths.

The blame China storyline is a leap of faith based on these two events. There remains no substantiation that the wheat gluten imported from China was in fact contaminated with aminopterin and the investigators have not said whether there were any other potential toxins in the pet food or if aminopterin was solely to blame. Aminopterin (or methotrexate) is widely present and used throughout China in the treatment of various cancers, ectopic pregnancies, and as a pesticide. In China aminopterin/methotrexate is used as a pesticide, that is on small insects. The extent of its use in China as a 'rodenticide' is unknown. Most rodent (rat/mouse) poisons are anticoagulent chemicals different from aminopterin/methotrexate. It is used in the USA for a variety of research purposes and was used in the 1950s to induce abortions. The substance is not registered as either a 'pesticide' or 'rodenticide' by the Federal government.
Fact is, the substance can be easily purchased and is used for a whole host of purposes. You can buy some direct from China here and here, for example.
Will ABC and Bush administration sources be successful in turning the public's outrage toward big bad rival China rather than the ineptitude of the Food and Drug Administration and their string of incredible failures on food (including pet food) safety?

Audra Ang At it Again

Audra Ang is the author of the Associated Press pieces that got picked up all over the world on a mob-police clash that allegedly took place March 10-11 in Zhushan village of Yongzhou county, Hunan, a hard scrabble area of tobacco processing and coal mining. Her reporting is responsible for the “1 Killed and 60 Injured” claim that roiled readers of newspapers from the Benton Crier to the Prescott Herald.

The source for Ang’s reports is an “eyewitness” named “Zhang Zilin.” But Zhang Zilin wrote the earliest report of the riot in Zhushan himself at the Boxun.com website where he was identified as a “Boxun reporter.” [ed. Note: the original page has since been scrubbed and the author is identified as “Boxun” and the photo captions changed as well.]

Boxun.com is an anti-Beijing propaganda website hosted outside China on servers in North Carolina and is affiliated with other websites such as Peacehall.com, Clearwisdom.net, Clearharmony.net, Faluninfo.net, etc., that are mouthpieces for the Falun Dafa cult.

Many of these “news” organizations receive money from US taxpayers courtesy Congressional appropriations to the National Endowment for Democracy and the Broadcasting Board of Governors that oversees almost a billion dollars in funds for “Radio Free Asia” and other outdated Cold War era propaganda outfits. They are known to plant stories that are usually based on hearsay – third hand reports that are rarely verified.

In this instance, Zhang Zilin, who claims to be an eyewitness to police brutality changed from reporter to “local human rights activist” in Ang’s dispatches although Zhang previously said he came after the disturbances took place and had only his cell phone camera to take photos. The photos – the only ones this reporter has found from the location – show two overturned burned-out minibuses (the riot was over a big price hike in bus fares) and a small group of what appear to be police in some sort of light gear mulling about. 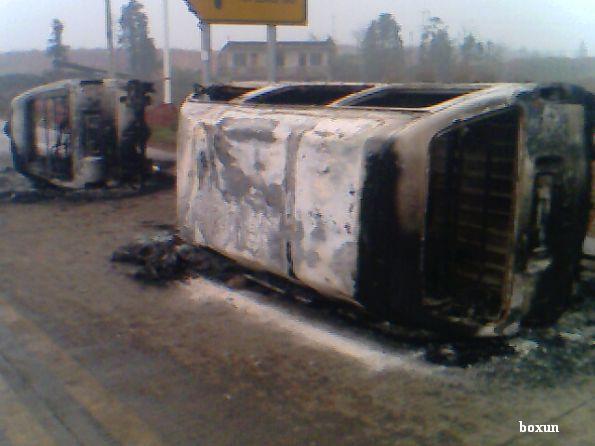 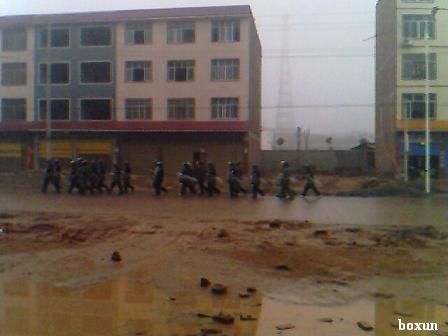 The claim that someone was killed and 60 injured is nowhere substantiated. The first mention of a death is by “Qian Zhao” identified as a “teacher at a local school” who “was told” that a student had been beaten so badly by police that he later died. Our “eyewitness” Zhang admitted that he “did not have any details.”

Interestingly, the first reports by Zhang Zilin showed his cell phone photos with the inscription “pan-blue” on them. A Zhang Zilin has been making trouble in Hunan since September 2006 as far as our research shows including an arrest in November 2006 in Hunan for planning a “Pan-Blue” demonstration. The “Pan-Blue Coalition” (sometimes referred to as “Alliance”) is a shadowy group founded online by Falun Dafa cultists that claims to assist Kuomintang supporters on mainland China. [ed. Note: the Pan-Blue Alliance on Taiwan is the opposition party made up principally by the Kuomintang or Nationalist Party and is currently working toward rapprochement with Beijing and ultimately reunification.] 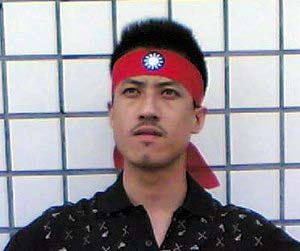 The Falun Dafa (Falun Gong) Pan-Blue group is something altogether different and claims thousands of members throughout China and is devoted to “negate Communism, promote the Three People's Principle, and resolve to unite the country through the Kuoming Tang” according to information found at the Epoch Times website.

The Falun Dafa crowd are fond of creating a disturbance during the Chinese national congress (currently in session) and have done so for many years. The Yongzhou-Zhushan disturbances could easily be another one of their showpieces.

Ultimately what do we really know? Police in the county confirmed that a public disturbance took place with police outside local government offices over fare hikes on buses. Two minibuses were overturned and burned. The number of people involved, the sort of people involved, whether there were injuries or a fatality, all these allegations remain completely unsubstantiated.

Battlefield Asia heats up this year with rival war games planned in Russia and Australia. In June "Talisman Sabre 2007" will bombard Australia's Northern Territory including ecologically sensitive areas around the famed Great Barrior Reef. The joint exercises will involve up to 14,000 USA troops and 12,000 Aussies and test all sorts of new weapons in a massive training of land, sea, and air forces in various simulations of an attack on China. The air component will fly B1 and B2 bombers from Guam on a round trip to rain bombs on the land below. The games are a result of permissions granted the USA in 2004 by the government of Australian Prime Minister Howard. There is some popular opposition building in Australia and the games could impact Howard's chances in this year's elections.

Not to be outdone, Shanghai Cooperation Organization leaders Russia and China will kick off "Peace Mission 2007" in July a joint excercise in the Chelyabinsk region of Russia's southern Urals. Chelyabinsk is an industrial powerhouse and home to Russia's biggest iron and steel complex. Both Presidents Putin and Hu are rumoured to be attending. The games will take place in a region close to the Kazakhstan border around 1,000 miles from the borders of Iran and Iraq. It is believed Russia is pressuring China for a direct military alliance perhaps by joining the Collective Security Treaty Organization. But Beijing appears in no hurry to forge an alliance although a change in Iran could change that quickly.