Sherrod Brown: He's On Taiwan's Side

As the voters of Ohio decide how to vote in the Senate race between Democrat Sherrod Brown and Republican Mike DeWine (the incumbent) they might ask whether their Senator will work for Ohio or wealthy special interests in places like Los Angeles? 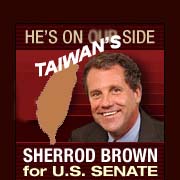 The Democrats say DeWine is beholden to big oil and drug companies and a GOP in$ider while Republicans say Brown is on labor union payrolls but what’s never mentioned by either side -- or the press -- is Brown’s devotion to Taiwan money.

Sherrod Brown is co-chairman and founder of the Taiwan Congressional Caucus (along with other anti-China blowhards such as arch conservative Dana Rohrabacher of California). The Taiwan Congressional Caucus is a bipartisan group shaped by the heavy hitters of Taiwan influence peddling such as TECRO, Formosan Assoc. for Public Affairs, and the Formosa Foundation whose Chairman, Donald S. Lee, is a Sherrod Brown campaign contributor.

Brown believes Taiwan is a “miracle” democracy and aims to end the USA’s long-standing and delicate “one China” policy. But for whom – the people of Ohio or an unpopular fringe element thousands of miles away determined to maintain control of Taiwan?

It seems only the conservative New York Sun with its ties to American Enterprise Institute, etc., is following the Keyser story. Some interesting tidbits in staff reporter Josh Gerstein's latest dispatch of August 15.

No one should take seriously any of the so-called China "experts" involved after all this blows over. It will be interesting to see whether John Tkacik, for example, will still get prominent editorial space to spew his Red China scare line. And Keyser should escape jail because he helped "save" Harry Wu?!