After discussing their findings with Treasury Sec. John Snow (behind closed doors), Schumer and Graham postponed the vote on their 27.5% tariff on Chinese imports until the end of September (chances are it may conveniently fade away long before that date). Schumer talked as though China's end to a "fixed currency" was a new development (the USA Dollar peg ended last Fall) and somehow a result of his presence before the Mandarins at Zhongnanhai. Lindsey Graham is now "optimistic" the Chinese are moving in a directon away from alleged currency manipulation, revealing a defeat for Bob Pamplin and Graham's textile interest donors.

Does this signal defeat for Senate bill 295? Or a postponement until time for frothy pandering before election polls later this year?

Plans for the oxymoronic "China Free Trade Bill" cooked up by Charles Schumer (D-NY) and Lindsey Graham (R-SC) are to be announced at a press conference Tuesday after they meet with Treasury Secretary John Snow.

Various reports appear to reveal a rift with Schumer favoring a delay on the vote (Tresasury's line on currency manipulation might come out in April and Chinese President Hu Jintao makes an official Washington visit April 20) and Graham whose primary interest in the matter is directed by his state's textile industry generally and Mt. Vernon Mills specifically which is a primary contributer to Graham as is the owner of the mill, Dr. and ordained Baptist Minister Robert (Bob) Pamplin of Oregon.

An apt summary from Morgan Stanley chief global economist Stephen Roach: " With workers in services outnumbering those in manufacturing by a factor of five to one, the body politic in the industrial world has cast its ballot in favor of protectionism. Opportunistic politicians are taking the bait — seemingly unconcerned about the tragic lessons of the 1930s. " (SOURCE.) [UPDATE] 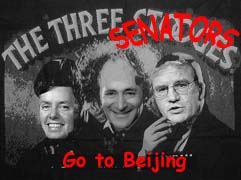 The China blame game looks to be THE theme for the remainder of the 109th Congress and is bipartisan all the way. Opportunistic politicians include plenty of Dems (Schumer, Sherrod Brown, the usual labor supporters) and plenty of Republicans (Graham, the OC (California) crowd - Duncan Hunter, Dana Rohrabacher, lots of Texans and so on). Sadly, the American people are an easy audience as most, even the Iraq war opponents, believe the nation's problems are not homegrown but imported from Beijing.

Donald W. Keyser (Don Keyser) former number two under Colin Powell will now be sentenced on March 24 (9 am at the US Federal Courthouse Eastern District in Alexandria, VA). Not familiar with the case? Read up here and look below for the post on it.
If Anybody knows what's going on with the delay (I assume the delay is just defense lawyer tactic to put as much time between the act(s), guilty plea, and ultimate payback as possible) please email me as I'm following the case.

That's how far back you have to go to remember year 'round double digit inflation in the USA. I can still remember my poor mother freaking out as gas climbed toward a dollar a gallon even in South Carolina! And me watching in horror as my beloved Pepsi cola almost doubled in price. It seems a South Carolina senator, Lindsey Graham, wants to bring it all back to us. He denied rumours that he was willing to table a vote on his and Charles Schumer's (D-NY) "Stupid Bipartisanship" (to quote the late great politcal economist Jude Wanniski) bill to impose huge tarifs on imports from China.

Perhaps this is why --per BushCo decree-- the US government will no longer report M3 statistics starting next week. M3 represents the growth of the money supply. Without M3 figures the official inflation rate becomes even more deliberately understated. And maybe this is why the Fed this week asked Wall Street to create NewBank in case there is a financial crisis and the two big banks that clear a trillion plus dollars a day for the Treasury Department can't handle things?

Don't forget the new oil bourse -- quoted in Euros -- set up Iran the other day.

Not much attention paid to this report about Nigeria turning to China for defense of its oil fields but it sounds important.