“By 2017, tariffs on 96 per cent of New Zealand’s exports to China, which currently cost exporters $120 million a year, will be phased out, giving our companies a unique competitive advantage in the fastest growing economy in the world. Our exports to China, currently at more than $2 billion a year, are estimated to grow by between $230-350 million a year faster than they would have without an FTA. That means a better standard of living and more jobs for New Zealanders." 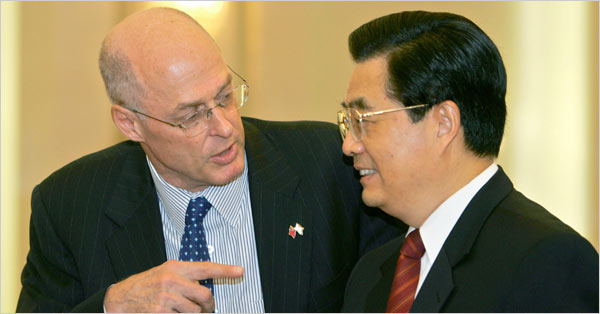 Meeting with BusinessWeek magazine editors US Treasury Secretary Paulson told of a recent exchange with his Beijing buddies:
Vice-Premier Wang Qishan (his Chinese counterpart in the US-China Strategic Economic Dialogue) said to Paulson recently, “We’ve been listening a lot to you and now we find out our teacher has problems.” Paulson said he responded, “Learn from us and you can avoid some of the mistakes.”
Teacher has problems, indeed.

Courtesy the Reuters UK press digest here's what the Chinese papers have to say:

CHINA SECURITIES JOURNAL
-- The China Securities Regulatory Commission issued rules under which brokerages must appoint compliance officers to help them strengthen internal controls and obey securities industry regulations.
-- Western Securities, which is planning a domestic stock market listing, reported that net profit in the first half of 2008 fell to 401 million yuan ($58.6 million) from 760 million yuan a year earlier as the stock market slumped.
-- More than 60 percent of domestically listed Chinese retail companies have said their profit growth continued in the first half of this year, thanks to stable economic growth and rising incomes, according to local consultancy Wind.

SHANGHAI SECURITIES NEWS
-- Chongqing Steel (601005.SS: ) estimated net profit in the first half of this year jumped at least 60 percent from a year earlier, helped by rising product prices and expanding output.
-- TCL Corp (000100.SZ: ) said trade in its shares would be suspended for one day on Tuesday pending a major announcement.
-- Property developer Beijing Huaye (600240.SS: ) said its controlling shareholder had promised not to sell newly tradable Huaye shares on the market through 2009, and in the following year would only sell shares at a minimum of 12.00 yuan.
-- Net profit at Guoyan Securities (000728.SZ: ) tumbled more than 50 percent in the first half of this year, mainly because of a 140 million yuan operating loss in core business.
CHINA BUSINESS NEWS
-- Baosteel Group has agreed to buy an 8 percent stake in southern China's Zhanjiang Port through the purchase of new shares in Zhanjiang, making Baosteel the third largest shareholder in the port, which may eventually go public, a senior Zhanjiang executive said.
FINANCIAL NEWS
-- Insurance companies have paid claims totalling 386 million yuan by July 12, which represents 86.4 percent of total claims.
-- Analysts said the huge increase in savings deposits, by 1.378 trillion yuan in June, indicated that consumers were more conservative due to high inflation.
-- China's foreign exchange reserves increased by an average of $42.2 billion per month in the second quarter, higher than the monthly trade surplus plus direct foreign investment, reflecting the pressure of capital inflows in anticipation of appreciation of the renminbi, said analysts.
CHINA DAILY (www.chinadaily.com.cn)
-- A BBC documentary alleging China has violated the UN arms embargo in Darfur is biased and made with ulterior motives, China's special envoy for Darfur said. Liu Guijin said "China's arms sales were very small in scale and never made to non-sovereign entities. We have strict end-user certificates."
-- Government departments should coordinate to monitor capital in the form of foreign direct investment, which could be a source of "hot money", said Zhang Ming, an economist at the Chinese Academy of Social Sciences. Zhang estimated speculative funds amounted to $1.75 trillion.
-- The Sichuan earthquake has left 1.4 million farmers in about 4,000 remote villages in absolute poverty. A State Council anti-poverty official said the government should "pump in a minimum of 12 billion yuan ($1.75 billion)" into the poor villages in the coming three years to ensure the villagers' basic necessities in Sichuan, Gansu and Shaanxi provinces.
PEOPLE'S DAILY
-- China will promote a household contract system in the management of collective forestry land and ownership of trees nationwide, an important step to boost the enthusiasm of farmers in planting and increase their income.
-- China's agriculture products are safe and can be used for visitors at Beijing's August Olympics. ($1 = 6.84 yuan)

Episode 60 of The Sinomania! Show for July 9, 2008, looks at Chinese stocks in clean tech, green energy listed on US exchanges, the G8 Summit, new report says China will be world's biggest economy in a generation, and more!

According to the prestigious and often highly influential Carnegie Endowment for International Peace, the Chinese economy will surpass the USA by 2035 and possibly be double in size by mid century, far outpacing any other nation. The report challenges the notion that China's development is centered on exports to the United States and other "developed" nations.

In the background of this year's G8 summit in Japan, Chinese President Hu Jintao and Indian Prime Minister Manmohan Singh met yesterday and discussed the intertwining nuclear ambitions of India, the USA, and China. Bigger news for the budding China-India (or "CHINDIA" in tabloid speak) relationship was the announcement that trade between the two giants is up 74% year-on-year for the first seven months of 2008 to $24 billion (US dollars).

from the Xinhua Finance newsfeed: