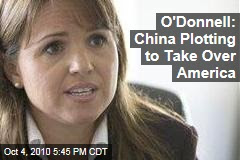 National Day 2010: To the Moon and Beyond

Amid quiet celebrations for the 61st anniversary of the founding of the People's Republic the Chinese space program launched the Chang'e II lunar probe. The probe will eventually settle into a close orbit around the moon to survey a possible landing site. It will eventually either crash onto the moon or be sent into the solar system. The rocket launch was broadcast on national television and took precedence over reports of wreath laying at the Monument to the People's Heroes at the center of Tiananmen Square in the national capital.
For perspective, Russia and the USA achieved orbiting lunar modules almost a half century ago in 1966... Two significant reforms underway this week in China: Beijing approved expanding Shanghai's interbank market to a "National Interbank Loan Trading System" with 21 big banks signed up for interbank lending and word in Lujiazui is that real Credit Default Swaps are coming. And Reuters reports today that short-term commercial paper will be traded in the interbank market creating a new vehicle for short term financing and away from dependence on bank lending.
Bank lending has expanded enormously in China in answer to the Panic of '08. Today over 45 trillion Yuan or $6.8 trillion US dollars in bank lending are outstanding a number not far off that in the USA.... 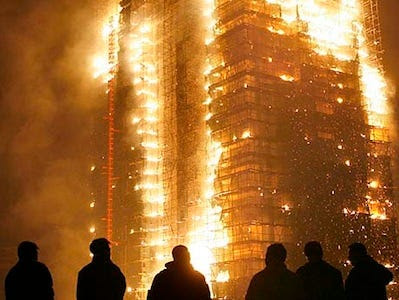 China hand Bill Bishop at Forbes' China Tracker blog calls out Andy Xie for now saying Chinese real estate is not a bubble but may have peaked and will decline slowly thanks to government actions. Again I ask what became of the China Crash Call? Will Marc Faber, Jim Chanos, Gordon Chang, the editorial boards of the Wall Street Journal, Financial Times, Nomura Securities, etc., change their tune too....?

A flurry of news stories on China's longstanding ambitious plan to divert water resources from the Yangtze River basin north are gaining currency in the mainstream media. The source appears to be this report in Wednesday's LA Times. Most of the reporting is critical with China gatekeeper Orville Schell asserting that China is attempting to "re-plumb" the nation a task "no country" has yet done successfully.

Schell's comment is particulary odd given his location in northern California. What of the 700+ miles of canals and pipelines in the California Aqueduct system that bring northern California's water south? Or the Colorado River aqueduct that taps the Colorado River 250 miles east of Los Angeles? Both diversion projects had their critics and opponents before they were built directly by the US federal government in the 1930s.