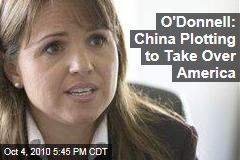 Comments:
she is a confessed witch and reminds many communist followers of madam mao.