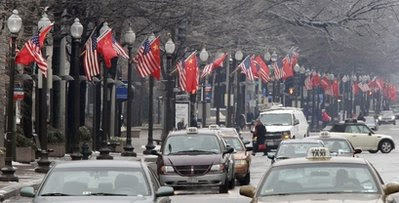 Comments:
What about the demands fro market access? China shuts us out but expects to sell us everything. Glad to see that is a push. See this: http://www.nytimes.com/2011/01/19/world/asia/19prexy.html

I agree access to markets in China is very important but the NYT piece gave few specifics. the vague reference to government procurement should be the headline here. One way Obama could push back would be to demand China begin accession to the WTO Government Procurement Agreement - a requirement of WTO accession that China has ignored for a decade now! Why is this not a top priority for the administration versus tit-for-tat tariffs and countervailing duties on behalf of private companies and campaign contributers (big labor)?

however, your dismal prognosis is a bit extreme. the stupid people are not really in charge - thank god, me, and mao. society of mutal protection rarely leads the society of mutal distruction. i think it has to do with matrix inversion and calculas based physics and the conservation of chaos theory - confucious say.

your "tomahawk right" explanation on pentagon behavior is not surprising. nato is still waiting on 40,000 chineese soldiers for iraq and 100,000 redskins for afghanistan.

excellent opening sentence and broadside. emphasising hillary's precocious diplomatic skill in your title does a disservice to your most important point.

war is personal and it is good for business.

effectively export democracy and send more stupid social workers into the very very dangerous land of allah because it is in the best interest of china and the backwoods of america.