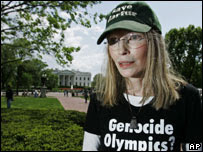 Disappointed with fundraising totals after the op-ed she and son Ronan penned for the Wall Street Journal failed to galvanize international support to boycott the Beijing Olympics, Mia Farrow fought back last week with a new publicity stunt on the refugee crisis in the Darfur region of Sudan: an anti-Olympics torch relay race.
The race began last weekend at Ms. Farrow’s farm in Litchfield County, Connecticut, and was preceded by an outdoor party that got off to a rough start when actor George Clooney’s helicopter clipped some trees and crushed the caterers! “I remember Frank [Sinatra] had this thing about his aunt [Rosemary Clooney],” Mia murmured, “I actually got jealous – so I put a picture of her with a dagger through it in his dressing room at the Stardust. He never did say anything about that…”
Unperturbed, the ever placid Mia got the hook up from guest Martha (“I’ve been making money off Darfur longer than you”) Stewart on a super great holistic Sicilian eatery on the upper East Side. And in no time, o’douvres and pastries were rushed to the scene by a fleet of express Hummers.

The toughest leg of the race would be the climb up flight after flight of stairs in The Langham, the location of Farrow’s famous apartment inherited from her movie star mother.
“She’s got all the oppressed groups participating,” raved neighbor Nancy Kissinger, at the race’s kick-off party, “there’s a Shiite man and a Sunni woman, one of those long-necked ladies from Burma or whatever it’s called now, and a peasant from a volcano in Central America!”
Highlights of the afternoon gathering included a violin performance by ex-husband Woody Allen’s wife Soon Yi Previn (“Well, she is my daughter,” Mia exclaimed) and the return of son Ronan from Yale for the summer. “Aren’t you glad,” Mia cooed between suffocating embraces, “that mommy got you Darfur??!”

After hours of speeches and intense condemnation of evil multinationals and Steven Spielberg (“He’s a self-hating jew!” screeched Mia at one point causing a startled drink bearer to upset a tray of virgin ‘tinis), rifles were fired (“If only those were bombs dropping on Khartoum” I heard someone say) and the race was on!

Party-goers frantically scrambled to their cars, an assortment of Rolls-Royces, Mercedes, Hummers, and BMW SUVs, to drive down for the race finale. Mia ran to the caterer’s stretch Hummer – “I don’t drive myself!” she laughed and I got a chance to ask her some questions directly.

“Mia, why Darfur?” I said, quickly turning on my microphone.

“I never spend a day without thinking about it ... it's impossible to put Darfur out of one's mind,” she said.

“But what about your own country’s support of oppressive regimes in Nigeria, Guinea, in the Middle East, not to mention the abusive occupation of Iraq?”
“Huh?” she responded looking puzzled.

“Don’t you think it’s hypocritical to blame China – a country – for the problems in Sudan?” I pressed on, “Are you aware that both sides are black, muslim, and have committed terrible atrocities – it’s not a black and white issue there. You are a goodwill ambassador for the United Nations Children’s Fund but the UN says there is no genocide in Darfur.”

“Are you f*cking nuts?!” she screamed back at me and jumped into the back seat of the Hummer. “This is my genocide, dammit, Africa’s the future –bomb Beijing!”

And with that the car door slammed and she was off to the UN.

Only US Congress, World Far-Right Worried About China

According to a world-wide public opinion poll published by the Chicago Council on Global Affairs, most people in the world are not bothered by the rise of China. The results of the poll reveal some interesting bed-fellows. For example, the biggest positive response to China comes from Latin Americans -- majorities in Mexico, Peru, and Argentina all viewed China positively. As did Iranians and Israelis and most people in Thailand. The most negative responses were in United States and its satellites the Philippines and South Korea and among the French. Anti-China feelings in the United States are a legacy of the barrage of anti-China propaganda fed to Americans for generations by Henry Luce and his media empire and far-right anti-China groups and media outlets that continue to warp Americans minds about China.

Most intriguing, the majority of the people polled around the world were equally distrustful of the USA and China.

So says a headline release from the Scripps Howard News Service sans the question mark. The spin (why haven't we seen this headline on Drudge yet?) is a ridiculous misreport of the latest report by the Stockholm International Peace Research Institute (SIPRI) that watches arms expenditures around the world.

According to the report the USA remains by far the world's biggest war machine with well over half a trillion dollars in annual arms spending. China is actually listed at number four after the UK and France. According to the report the top five military-industrial complexes and their 2006 revenues were: the USA $529 billion (46% of the entire world's weapons spending); the UK $59 billion; France $53 billion; China $50 billion (not even 10% of USA spending); and Japan $44 billion.

The Scripps Howard piece uses the purchasing-power-parity (PPP) equivalent figure for China at $188 billion. But that is specious unless the news services also explains that measured by PPP China is the second largest economy in the world just behind the USA.

If we're going to parse the data, a more revealing measure, provided in the SIPRI report but completely unreported, is military spending on a per capita basis. The USA spends $1,756 for each of its (legal) citizens versus only $37 spent per person by China on its "war" machine.

It strikes me as particularly hollow that Speaker Nancy Pelosi used her pulpit as head of America's House of Representatives to breathe life into the propaganda that what happened in Tiananmen Square on June 4, 1989, was a massacre of "pro-democracy" demonstrators and students and - more ridiculous - ominously threatening that maybe China won't get to host the Summer Olympics next year (as though the Olympics were the USA's to give or take away). Why hollow? Because I doubt that Pelosi will issue any statement on July 28 on the anniversary of the suppression of the Bonus Army that occured right outside the halls of Congress when US Army troops killed and wounded American protestors with guns and tanks. But that was back in 1932.

More ridiculous still is that Pelosi still thinks the USA has any moral ground to claim whatsoever in the wake of the Iraq occupation and our conduct at the Abu Ghraib and Guantanamo prisons. As for the Olympics Madame Speaker, the games are awarded to a CITY not a nation and the voting, in which the USA fully participated, is conducted by the International Olympic Committee and is not controlled by the USA and it is not in your power to declare whether or not the Chinese get to host the Olympics.