Taiwan President Chen Shui-bian showed his hand on Monday and revealed that it is firmly ensconced in Uncle Sam’s glove. In an interview with the influential Financial Times (reported here by MSNBC) Chen said that he would not use missiles against China “without seeking the United States' opinion first.”

With this one revealing statement Chen clearly shows that Taiwan will respectfully defer to its creator even in matters of life and death. That is unless the looming threats of Chinese missile attacks used to justify American arm sales to the economically challenged island are themselves bogus.

Chen attempted to clarify his unpopular popular referendum on the island’s sovereign status with this tongue-twister: “It is not a referendum that moves towards independence but one that rejects unification.” Ah, politics. His statement neatly reflects the latest “independence or unification” pubic opinion polls that show well over half of the country wanting status quo indefinitely or decision later.

Meanwhile, Taiwan mutual funds are getting the green light to buy mainland stocks, Taiwan insurance giant Fubon is planning a joint venture across the straits in Xiamen, and so the economic integration slowly grows repeating the process by which China coolly absorbed Hong Kong and Macau. 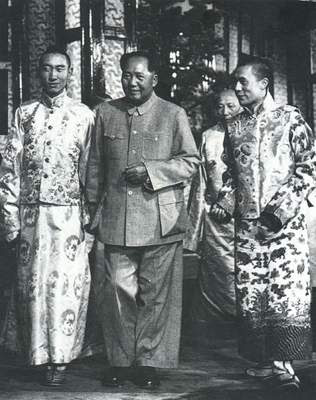 Until 1959 the Dalai Lama (at right in the photo) was a regular in Beijing, meeting with Chairman Mao, jockeying for position as the official reincarnation of the 10th Panchem Lama of Tibetans. From earlier times there is uncertainty as to which of two contenders is the true 11th Panchem Lama.

Since his abortive uprising - an event more than one investigator has shown was broadly (if not overtly) conducted with American and British covert operations - and move to India, the Dalai Lama has raised untold million$ in his quest to return to Tibet as the true reincarnation.

Although never mentioned by the New York Times/WashingtonPost/Associate Press editorial line, the Dalai Lama does not want to "free" Tibet but ensure himself and his chosen successors as heirs to Tibet's ancient and oppressive theocracy. Read this year's explanation of his policy.

After meeting earlier with President Bush behind closed doors, the Dalai Lama chose today to accept the Congressional Gold Medal from the United States Congress. The medal is awarded to civilians (the congressional Medal of Honour is specifically for military service) for outstanding achievement in the national interest of the United States. But in what way has the Dalai Lama served the USA's national interest?

A lot was made of the "harsh words" from the Beijing government in response to the ceremony in Washington. But how can the government of China not view this odd coronation as yet another American unilateral decision over an internal Chinese matter?

In accepting this inappropriate award the Dalai Lama tarnished his image forever. That he would accept a medal from a group of politicians (with abysmal approving ratings) that allow (if not encourage) the USA military, its contractors, and executive agencies to torture and abuse human rights around the world reflects how completely out of touch he is.

For people outside the celebrity party circuit and for many Chinese he can no longer be viewed as an unbiased voice for peace but as a tool of the American government.

Last week was a week-long holiday (a "Golden Week") for urban Chinese and was marked by an upsurge in consumer spending (how American!) and travelling. Today is Double Ten holiday in Taiwan marked by an ugly display of militarism - a parade of missiles, armored vehicles, and painted soldiers.

Taiwan President Chen Shui-bian smiled and waved and played the petty dictator despite dwindling political support and historic low approval ratings. It has been almost 20 years since Taiwan saw fit to celebrate with a military parade. Is it a last ditch effort by Chen and his US and Japanese backers to provoke a confrontation with Beijing? We'll find out by March ...